How I became a Pro Domme I’m often asked about how I got to become a Pro Domme so here’s the long version... I was born the youngest of two sisters in Sheffield I went to a state mixed gender school where I was a  relatively smart but naughty girl. I played hockey and some other sports and attended Army Cadets as an extra curricular activity. Army Cadets seemed to teach me a lot about discipline and I quickly progressed in the ranks bossing the boys around. Apart from this for fun I’d practice my make up and hair skills.

After school I worked hard in many dead end jobs and and ended up moving to Dubai where I bagged and blagged working in a high stress corporate career in  the area of the Dubai Industrial finance centre where I fell in love with business women's dress sense.  Prada pencil skirts, Gucci high heels and  exquisite handbags and figured if I dress the part surely I will become the part but unfortunately the corporate life wasn't for me. But the Luxury life was.

Anyways I created a profile, and naively I added photos from my younger days as well as some LinkedIn head shots I had on my phone. The following morning I had 33 messages. Some were creepy (most to be exact) but there was on that stood out. “Adam age 42, retired” was his profile the picture was of some grassy landscape which I later found out was a golf course but it was the message that intrigued me 400 pounds for you to fuck me... I am not fucking him I thought, then it clicked... I told you I was naive. I would be the one fucking him! Ahhh, sound fun I thought and we arranged a date.

Adam was nice enough, well dressed, well spoken and polite. The kinda guy who your mum would like. Like myself he’d worked in stressful corporate jobs ... we’d never met and was probably more middle management than the high flyers I was used to dealing with, however, he was successful with investing in the early stages of crypto and now drove a red sports car (don’t ask me which one as they all look the same). To your average person Adam was straight laced and probably boring, however, when I first met Adam he’d paid me to peg him so he probably not all was first as appeared. His profile pic was of a golf course so it didn’t surprise me he was wearing a Ralph Lauren jumper and jeans. I felt a little over dressed in my black evening gown and pair of Jimmy Choos. My hair was immaculate and makeup on point. The hotel room was a suite so I started by spreading myself on a chez lounge and making him feel nervous. So Adam, how are we gonna do this? He started to stutter and stumble over his words as he poured wine onto his hush puppies rather than the glass he was holding. Go to the bedroom and remove all of your clothes I commanded you have 2 mins before I join you. Before I’d even finished the sentence he was heading off doing exactly as he was told. I walked over to the bottle of wine downed a glass then quickly another and proceeded to towards the bedroom. Catching a glimpse of my long smooth stocking clad legs in a full length mirror I could only think how sexy I looked in my evening dress with the split down the side. Getting the strap on out of my bag putting it on I felt so powerful and I was dripping with wet excitement in my black lacy panties.

I walked in the room and walked over to Adam and with a little fake confidence I told him the rules. Rule 1. Don’t talk, Rule 2. Do as I say 3. Rule 3. I leave in 4 hours time whatever happens. He looks directly in to my eyes and nods. Stand up I commanded which he did, his semi erect penis slapping against his stomach. Bend over here I beckoned pointing him towards the bed.

Over the next few hours I pegged Adam and he also begged to suck my big strap on clean and get a good hand spanking of course I enjoyed every single moment of it. Being in charge, being bossy and humiliating him was made for me. I had finally my career of choice! Something I love and I am passionate about.

I never did see Adam again, although he taught me a lot, and I don't charge 100 pound per hour any more unfortunately for you either. However my skills have come a very far since then so my prices are definitely worth it. The last 7 years have been a ride and I have travelled, met a lot of amazing clients, sex workers and I wouldn't change it for the world!

How I became a Pro Domme 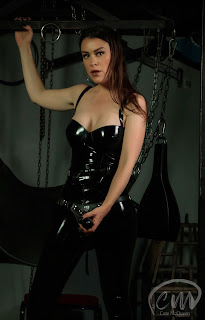 If you would like to serve me in real time then you should be prepared for an intense mind blowing session where you will surrender to me and I will be completely in control. I get the absolutely most pleasure out of real life meetings and would love to accommodate your kinks so for this reason I ask for an initial email from you stating you would like to book a session and I will ask you some questions from there. cate@catemcqueen.com